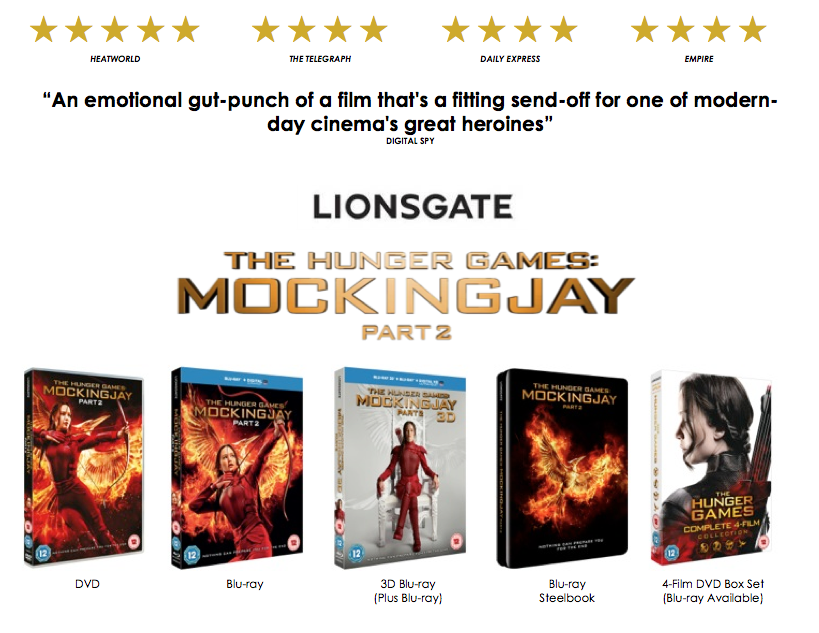 Lionsgate announced the dates of Mockingjay: Part 2 home video release on Monday as March 8 (Digital) and March 22 (DVD/Blu-Ray). The UK, however, will be getting the release on DVD, Blu-ray, 3D Blu-ray, Blu-ray Steelbook, Digital Download on March 21, a day before. In addition to the standalone DVD & Blu-ray release, for the first time in the history of the franchise, Mockingjay: Part 2 will also … END_OF_DOCUMENT_TOKEN_TO_BE_REPLACED

Entertainment Weekly exclusively announced earlier that Mockingjay: Part 2 is set to get a Digital HD release on March 8. Following that, the movie will be released on DVD/Blu-Ray on March 22. The 5+ hours special features on the DVD include audio commentary from director Francis Lawrence and producer Nina Jacobson, and a detailed look at Cinna’s sketchbook. The complete 4-film collection will also be hitting the … END_OF_DOCUMENT_TOKEN_TO_BE_REPLACED

In a sit-down interview with Collider for their yearlong IMAX screening series, Director Francis Lawrence talks Mockingjay: Part 2, along with an in-depth discussion on The Hunger Games franchise, adaptation, filming and lots more. We learn a lot of interesting tidbits: Due to the abruptness, there will be no one-cut movie combining Mockingjay Part 1 and 2, as had been rumors for a while. When and if there’s an ultimate … END_OF_DOCUMENT_TOKEN_TO_BE_REPLACED 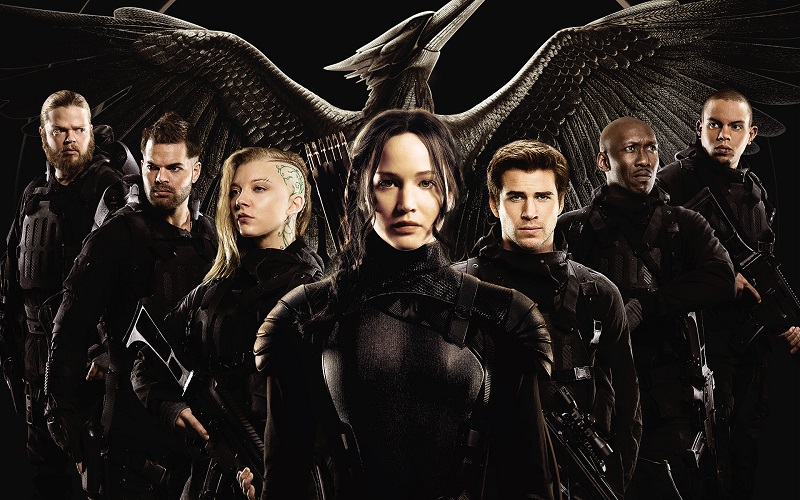 A brand new trailer for The Hunger Games: Mockingjay Part 1 promoting the upcoming Blu-Ray/DVD/Digital Download release debuted on iTunes. Watch the video, featuring new footage from the movie, below: The movie is now available for pre-order on iTunes. Thanks QQ! END_OF_DOCUMENT_TOKEN_TO_BE_REPLACED

So the movie is barely out but Amazon UK has the DVD and Blu-ray for Mockingjay: Part 1 already up to pre-order, including a 3-movie box edition steelbook with The Hunger Games and Catching Fire as well. Click on the links below to check out each product: Blu-ray: Steelbook [Blu-ray]: 1-3 Box Set [Blu-Ray]: DVD:   Please note, as each of the products emphasizes, the artworks are yet to … END_OF_DOCUMENT_TOKEN_TO_BE_REPLACED

The Hunger Games: Catching Fire comes out on DVD/Blu-Ray and Digital HD tomorrow, March 7. With one day to go, we have a new spot for the movie. Watch it below: The cast of the movie will be attending midnight Walmart signing sessions tonight in LA, Chicago and New York/NJ. Details can be found here. Check out our review of the DVD/Blu-Ray and enter our … END_OF_DOCUMENT_TOKEN_TO_BE_REPLACED