The Hunger Games series has been subject to censorship for its graphic depiction of violence, with the claim that the story would desensitize younger audiences. It is a matter that has been troublesome over the years primarily for cinema, while literature remained for the most part impervious, though not without its own suppression.

Motives for including such distinctly affecting subject matter come into question, particularly more critical the more blunt its illustration. The censorship debate has long been an arduous one. Although many thorough scientific studies concerning the relationship between violence output and the observation of violence have been accumulated, there is hardly any denying its potential to desensitize an audience.

America as a whole went through the entire process during the sixties with cinema. When footage from the Vietnam War released domestically, citizens were significantly disturbed by the explicit images on their televisions. The result was a nation completely unsatisfied with the unrealistic and now clearly restrained violence in films. The whole cinema experience was left oblique, incapable of generating profit for thirsty audiences. By 1971, the Production Code excessively restricting films (yes, there was a time when showing a toilet on film was NOT acceptable) was finally replaced by the ratings system.

The affair upturned everything, and resulted in the releasing of the floodgates. Any violence that could be shown was shown in cinema. A whole genre—dubbed “exploitation films”—was born with the goal of simply shocking its audiences with as much sex, profanity, and things incapable of showing before as possible. This is all essential to understand, because none of this amounts to The Hunger Games.

These stories aren’t violent for the sake of being violent, or to “break new ground” since literature never had the issue anyhow. They are meant to be gruesome, gritty, and blunt because that is the product of the Hunger Games world’s paradigm. It represents the many sacrifices of the protagonist and the Districts, and the grim nature of having a totalitarian government.

And the stakes couldn’t be higher. Which is partially the reason for alarm. The idea of a human survival tournament isn’t new. The “Mortal Kombat” video game franchise reaped constant profits from depicting the most bloody, gory possible ways to kill each other for years. It spawned two feature films, a Machinima web series, and remains successful—and it too was designed for younger audiences.

Even (dare I say it) Star Trek, the original series starring William Shatner—the actor who invented stop-acting—featured an episode in which the entire crew is forced to fight each other to the death on some unknown planet ruled tyrannically.

The difference is, regardless of target demographic, The Hunger Games features children murdering each other. It may be a horrifying truth, but no readers have complained so far. We already are this desensitized. The violence of the novels isn’t just to up the ante, so much as to be the ultimate profession of love from Katniss to her sister. The more violence, and the more treacherous the games, the more it’s clear how much Katniss was willing to give for Prim.

This is why the film is approaching the story incorrectly with a PG-13 rating, and of course capitalizing on the love triangle. This story is not about restraining violence, it’s about emphasizing it. Because this story isn’t about articulating Katniss’ choice between Gale or Peeta—it’s about her unconditional love for her family, and the many decisions made to protect them. It’s a story that doesn’t belong in today’s cinema, but in our hearts. 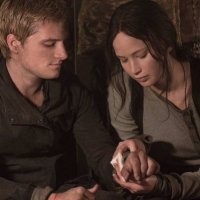