Josh Hutcherson is all set to trade his acting chair for the director’s with his short film, Ape, in which he also stars as Travis, a young man who has schizophrenia.

The film is part of The Big Script, an incubator series-collaboration between Josh’s company Turkeyfoot Productions, digital studio Indigenous Media and Condé Nast Entertainment-which mentored young writers and is focused on shining the light on new voices.

You can watch the full movie here.

Josh talks to Variety about the venture.

What excited you about the project?

I’d read it seven years ago and loved and tried to make it, but it fell apart. I was just going to act in it. Thankfully, I called up the writer (Jon Johnstone) and no one had the rights, so I told him what we were going to be doing and he thought it sounded great. We collaborated immediately and quickly because we were up against the clock.

Why now get into directing? Why not in the future or in the past?

I’ve had a few opportunities over the years to direct and I’ve written a couple shorts that I was going to direct, but there was something about just being too overly ambitious and too young. It’s such a responsibility to direct a movie. It’s real leadership and with age, you gain some seniority and feel a little more grounded and confident in yourself. It was waiting until it felt right and this came across as a crossing point between those two factors: me always wanting to direct and now finally confident enough to do it, and this project sort of came in to my life. It was a great opportunity because I’d only wanted to do a short first. I didn’t want to dive into a feature full on. The mentorship that I got from Jon and Rodrigo (Garcia, co-CEO of Indigenous) and their team was really something that gave me confidence. They had my back.

Why do you think it’s important for young people to make movies for and about their own demographic?

It’s really important to feel represented. I’ve obviously read quite a few scripts in my life, and there’s a certain way that many writers, who are not my age and didn’t grow up in my environment, try to write a character that I connect with. It happens — there’s some great writers who do do that and those are the ones you fight to make. But most of the time, it doesn’t feel authentic. I think there’s a certain authenticity when you have young filmmakers and millennials coming up and trying to tell stories that they care about and connect with. It makes it more accessible for those audiences that we want to give good content to.

What are your plans for directing and creating your own stuff going forward?

I’ve written a couple of short films and I think after doing this one, it’s kind of given me a bit more of the confidence to dive into those. Also, we’re definitely going to try to push forward and make “Ape” a feature. This is a genre I really like, these very cerebral, psychological thriller-esque type things, but I’m also obsessed with the TV show “Girls,” so I would love take a swing at something a little more contained and personal like that as well. Plus, I have a TV show I’ve been developing with Indigenous for a while.

Read the full interview at Variety. 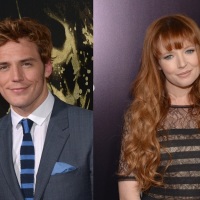 This website (HungerGamesNet.com) is a non-profit "FANSITE" dedicated to The Hunger Games trilogy by Suzanne Collins. We do not affiliate with Scholastic, Lionsgate or any other related entity. All media are being used under the Fair copyright law 107. None of the bloggers claim any media as our own. Anything that should be removed, please contact first, and we will cooperate completely to resolve any problem.   Read Full Disclaimer & Terms of Usage here.
Loading Comments...
Comment
×
%d bloggers like this: