Elizabeth Banks, who we all know as the eccentric District 12 escort Effie Trinket in The Hunger Games, is all set to reprise her brief role of Sal in the hit TV show Modern Family. Sal appeared in Season 1 as Mitch and Cam’s partying girlfriend.

In the episode that’ll air in 2013, Sal delivers big news to Mitch and Cam that she’s getting married. (Could she be in need of a couple of bridesmen?)

Banks will film her episode next week. 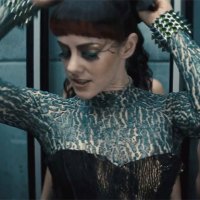